What are some properties of Nitinol that make it so biocompatible for medical use?

How is nitinol processed and melting process? 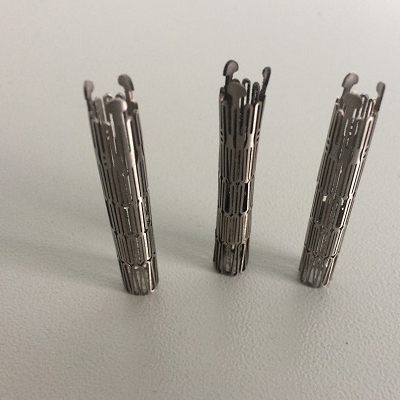 The good biocompatibility of nitinol alloy is due to the formation of TiO2 passive film on its surface. The function of TiO2 film mainly has two aspects:

A Ca/p layer will be formed on the surface of nitinol alloy after immersion in human simulated body fluid or implantation in vivo, and Ca and P are the basic components of bone tissue. TiO2 passivation film will accumulate Oh – on the alloy surface, improve the pH value of body fluid, and promote the nucleation of calcium ions and phosphorus groups on the oxide film surface. Phosphorus containing groups are first adsorbed on the surface of TiO2 oxide film. In order to maintain the electrical neutrality of simulated body fluid, Ca2 + in the solution is also adsorbed on the surface.

Gradually form CA10(PO4)6(OH)3,the implant and tissue are integrated with each other, the adhesion between them is enhanced, and the long-term implantation effect is ensured. At the same time, the formation of surface Ca/p layer makes it more difficult for Ni ions to migrate through the lattice to the solution, which is conducive to inhibiting the dissolution of Ni ions.

Nitinol shape memory alloy, 316L stainless steel and carbon fiber reinforced carbon were implanted subcutaneously and in bone of rats for 10 months respectively. It was found that nitinol shape memory alloy had no damage to local tissues. The inflammatory reaction was mild, the time of tissue repair was short, no discoloration, corrosion and cytotoxicity were found, and no local tumor was found during the observation period equivalent to 2/5 of the biological life. Compared with stainless steel and carbon fiber reinforced carbon, NiTi shape memory alloy has better biocompatibility and lower biological degeneration.

Nitinol alloy has good corrosion resistance and good histocompatibility. It is a safe and promising biomedical material.