Study on the safety performance of self expanding nitinol stent 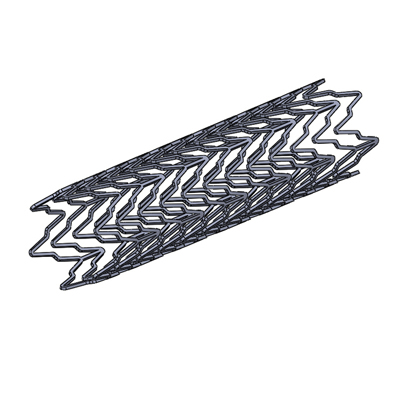 Although nitinol alloys have been used in the field of medical devices for decades,the biosafety risks caused by Ni ion precipitation in alloys have always been the focus of clinical researchers. Through the surface modification of nitinol alloy to inhibit the precipitation of Ni ions and improve its biosafety has also become a hot topic in enterprises, hospitals and scientific research institutes over the years. At present, the surface modification techniques of nitinol alloys commonly reported in the literature are mainly divided into two categories:surface oxidation method and surface coating method.

The surface oxidation method of nitinol alloy is based on the high chemical adsorption affinity of titanium to oxygen. TiO2 thin film layers are manufactured on the surface of nitinol alloy through thermal oxidation,plasma injection,laser remelting, electrochemistry and other methods. TiO2 itself has good biocompatibility. As a modified layer,it can effectively prevent the precipitation of Ni ions and is an ideal protective layer. During the formation of the TiO2 thin film layer,the titanium elements in the alloy migrate to the surface so that there is a nickel-rich layer below the surface modified layer. In the event of local damage or corrosion breakdown of the TiO2 layer, the nickel-rich layer will be exposed to the external environment,resulting in more serious Ni ion precipitation. Therefore,improving the thickness, density, binding strength and corrosion resistance of the surface modified layer is the direction in which the surface oxidation method should be improved. The preparation of TiO2 film by thermal oxidation method can improve the corrosion resistance of the body. The temperature and oxygen partial pressure are the key control parameters,which have an important impact on the thickness of the TiO2 layer and the Ni atomic content in the TiO2 layer. This method is a commonly used nitinol alloy surface modification method in early large-scale production. The TiO2 layer obtained by atmospheric thermal oxidation method has poor uniformity and weak binding force to the matrix,which has limited improvement in the corrosion resistance of the alloy.

Plasma injection method is a surface modification method in which accelerated ions in plasma are injected into the substrate as dopants. Currently commonly used injection elements include O, C, N, Ta,Ag, etc., which can form TiO2, TiC, TiN, Ta2O5, TiNiAg gradient modification layers on the surface of the alloy. Among them, Ag ion implantation is conducive to improving the antibacterial properties of the alloy,and the biocompatibility of the alloy after N ion implantation is the best. The surface modified layer obtained by this method helps to improve the wear and corrosion resistance and biocompatibility of the substrate,and the combination of the modified layer and the substrate is relatively strong. Untreated nitinol alloy surface contains C, O, Ti, Ni and other elements.Under the appropriate laser parameters,after laser remelting treatment,the remelting layer tissue is significantly purified,inclusions are significantly reduced,the density is increased,and the remelting layer and the substrate have a high binding strength, improving corrosion resistance. Electrochemical method usually refers to anodic oxidation method,which uses nickel-titanium alloy as an anode,using electrolyte(usually H2SO4)under the action of external current to form a layer of oxide film on the surface of the substrate,inhibiting the precipitation of Ni ions,and improving the corrosion resistance and surface finish of the body.

The surface coating method of nitinol alloy uses electrochemical deposition,plasma spraying, sol-gel, magnetron sputtering, dip coating and other methods to prepare a modified film layer of nano-to micron thickness on the surface of the alloy to enhance the biocompatibility, corrosion resistance and wear resistance of the alloy matrix. The limitation of this method is that the binding force of the coating and the substrate is weak,and it is easy to crack with the substrate under the action of cyclic stress,and even break away from failure. Electrochemical deposition (including electroplating) refers to a circuit composed of a cathode and an anode in a certain electrolytic solution under the action of an electric field. Through a redox reaction,the target ions in the solution are deposited on the surface of the cathode or anode to obtain the target thin film layer. For example, the electrochemical deposition of suspensions formulated with hydroxyapatite, n-butanol and triethylamine by direct current can form a hydroxyapatite coating on the surface of nitinol alloy to improve the biocompatibility of the alloy. Plasma spraying technology uses a plasma arc driven by DC as a heat source to heat the target material to a molten or semi-molten state,and spray it at high speed to the surface of the pretreated substrate to form an attachment surface layer. The current coating material can choose hydroxyapatite,silicate ceramics,oxides and metals.

The spraying temperature of this technology is very high,and it is easy to form a large thermal stress,resulting in a higher residual stress when cooling. If not treated, the film-based binding strength will be reduced. Sol-gel method is based on compounds containing high-order chemical active ingredients as precursors.After three stages of solution, sol and gel, molecular and even nanostructured materials are prepared by drying treatment,and modified layers are formed attached to the surface of the matrix. There is a large amount of OH – on the surface of the modified layer prepared by this method ,so that the biological activity of the material is improved. It takes a long time to prepare the modified layer by sol-gel method,and it is easy to shrink during drying, reducing the binding force with the substrate. The magnetron sputtering method is to flush an appropriate amount of argon into a high vacuum,apply a DC voltage between the cathode and the anode,and ionize the argon through glow discharge. Argon ions are accelerated by the cathode and bombard the surface of the cathode target target material,sputtering out the atoms on the surface of the target material and depositing them on the substrate surface to form a modified film. By replacing targets of different materials and controlling different sputtering times,modified films of different materials and different thicknesses can be obtained. This method has the advantages of strong binding force between the film layer and the matrix, tightness and uniformity of the film layer. The dip coating method is to immerse the target matrix in the expected coating material,remove and dry it after a certain period of immersion,so that the coating is attached to the surface of the alloy to form a modified film layer,and optimize the biocompatibility, corrosion resistance and wear resistance of the alloy. The dip coating method is characterized by labor-saving and material-saving,high production efficiency, simple equipment and operation, and is suitable for substrates with more complex structures and small sizes.

Based on the superelasticity,shape memory characteristics and biosafety of nitinol alloy, it has been widely used in the fields of cardiovascular implantation, oral cavity, orthopedics, surgical instruments, orthopedic surgery and other medical instruments. For the surface modification of nitinol alloys,various methods have been reported and have significant effects. By adjusting the chemical composition,processing technology,heat treatment system and surface modification method of nitinol alloy,it will further enhance its performance in terms of biological compatibility, corrosion resistance, biomechanical compatibility and fatigue. It will continue to become a hot research topic in the field of nitinol alloy and its products, and promote its application in the medical field.