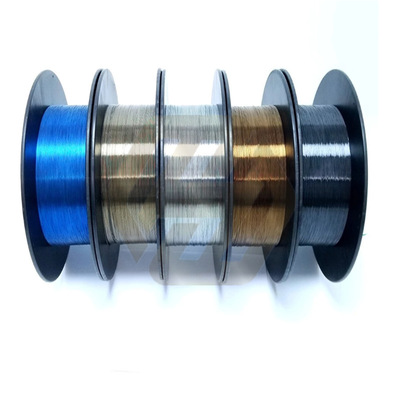 Recently, with the development of medical biomaterials science and the needs of clinical medicine, nitinol shape memory alloys have excellent physical and chemical properties such as high strength, wear resistance, corrosion resistance, non-magnetic, and non-toxic because of their shape memory effect. The hardness and stiffness are close to the bone tissue of the human body, and they are considered to be one of the ideal materials for implantable biological fixation, which has been widely used in the medical field. The currently reported application of nitinol shape memory alloys in the medical field involves orthopedics, stomatology, thoracic surgery, obstetrics and gynecology, and imaging disciplines. The products that have been developed include scoliosis hastelloy rods, hip prostheses, frame-type ulnar flexor fixation devices, patella fixation devices, intrauterine contraceptive rings, dental orthodontic filaments and other biomedical materials.

Many scholars use plasma technology to treat the surface of nitinol alloys and conduct comparative experiments with untreated nitinol alloys. During the electrochemical experiments, it was found that the surface corrosion resistance of the surface-treated nitinol alloys was significantly enhanced, and the TiNi coating showed greater roughness and good wettability, thereby increasing cell surface compliance. The MTT results showed that the cell activity and proliferation were similar in the coated, uncoated and negative control groups. However, the early apoptosis rate of the TiNi-coated group was significantly lower than that of the uncoated group, and the cell adhesion, stretching and proliferation of the Tin-coated group were significantly enhanced. In addition, the Tin coating increases the roughness and wettability of nitinol alloy, thereby enhancing the proliferation and adhesion of fibroblasts. A nitinol gradient film was prepared by vapor deposition. Through comparative experiments, it was found that the treated titanium has better hydrophilicity compared with the bare titanium matrix, but there is no significant difference compared with the untreated nitinol, and the untreated nitinol and the treated sample have similar good cell diffusion and adhesion of osteoblasts, so plasma surface treatment has no significant effect on cell activity and adhesion properties. However, the benign interaction between the coated material and the cells is mainly due to the significant improvement in the adsorption efficiency and ability of protein molecules. Therefore, surface plasma treatment makes nitinol alloys have better cell compatibility. Relevant scholars are also continuing to explore the mechanism of action of nitinol alloy surface treatment and cells, proteins, etc., to obtain data support for the continued optimization of the alloy.

The auditory bone chain reconstruction material prepared by nitinol shape memory alloy was implanted into the auditory vesicles of guinea pigs, and 5 guinea pigs from the titanium-containing implant group and the blank implant group were randomly sacrificed 7, 14, 28, 56, and 112 days after implantation. Tissue sections were used to perform morphological examination and analysis of tissue cells, staining to observe hair cell apoptosis and deletion, scanning electron microscopy to observe the arrangement of hair cell cilia in the basement membrane of the cochlea, transmission electron microscopy to observe the morphology of hair cell organelles, and auditory sex was performed on guinea pigs in each group before implantation and before execution at different points in time. Brainstem response and distortion response otoacoustic emission detection found that there was no significant change in the tissue morphology of the cochlea of guinea pigs at different points in time. No apoptosis of the hair cells of the cochlea was found. The cilia of the hair cells of the basement membrane cochlea were neatly arranged, and the organelles of the hair cells of the outer ear worm were not significantly abnormal. There was no significant difference in the threshold value of auditory brainstem response for 7, 14, 28, 56, and 112 days before and after implantation in each group, and the pass rate of distortion response to otoacoustic emission was 100%. The results confirmed that nitinol alloy auditory bubble implantation had no significant effect on the morphology and auditory function of the guinea pig cochlea, indicating that the nitinol shape memory alloy has no significant ototoxicity.

By implanting nitinol-shaped alloy implants at the far end of the left femur of 51 rats, and heating the alloy implants through electromagnetic induction, the temperature was controlled at 40 to 60℃ to adjust the shape and stiffness of the nitinol-shaped memory alloy implants at the far end of the left femur in rats, blood samples from rats were tested before and after the start of the test, and interleukin-1 (IL-I), IL-4, IL-10, tumor necrosis factor a (TNF-a) and interferon Y (IFN-Y) were measured. After the operation, all groups of human mice recovered well, and there were no obvious adverse reactions. After a week, the animals were put to death for histological examination. There were no significant differences in cytokine measurements and the detection of histological specimens. It has been confirmed that electromagnetic heating and adjusting nickel shape memory alloys have good safety, and it has also been proved that even under reheating conditions, nitinol shape memory alloys still have excellent safety and biocompatibility.

In recent years, with the rapid growth of fracture cases caused by accidental injuries such as traffic accidents and sports injuries, shape memory alloys have attracted more and more attention from doctors clinically. Nitinol shape memory alloy encirclement devices were used to treat 20 cases of multiple rib fractures. X-rays 8 and 12 weeks after surgery showed clinical healing of fractures, no fractures and no healing, loosening of internal fixation, slippage, and alopecia, confirming the good biocompatibility of nitinol shape memory alloys. In addition, a statistical analysis was conducted on the clinical efficacy of treating patella fractures. There were no surgical complications such as deep infection, loosening of internal fixation and fracture after surgery. Both of them had good results, and the nitinol shape memory alloy patella aggregator had the advantages of small trauma, easy operation, and good biocompatibility. It is particularly suitable for comminuted patella fractures.

Retrograde interlocking intramedullary nails combined with nitinol shape memory alloy bone snap rings were used for internal fixation to treat supracondylar femoral type A fractures. 19 patients were treated surgically, and 17 of them were followed up. The clinical healing time of fractures was 12-18 weeks, with an average healing time of 14 weeks. ; There was no loosening of internal fixation, fracture and deformity, joint infection, bone disjunction, etc., 2 cases of superficial incision infection occurred after surgery, 2 cases of knee synovitis, and 1 case of transient exacerbation of the original osteoarthritis. It shows that the biomechanical stability of fracture treatment by this method can effectively restore the stability and integrity of supracondylar femoral fractures, reliable fixation, and promote fracture healing. Moreover, the nitinol shape memory alloy bone snap ring has no loosening, fracture, deformity, and joint infection of internal fixation after implantation, and no fracture delayed healing, showing good tissue compatibility with implants.

As a biological bone repair material, nitinol shape memory alloy can effectively avoid the stress shielding effect, but the corrosion behavior under pressure, the selective adsorption of nickel on blood proteins, and the corrosion resistance and biocompatibility of porous nitinol shape memory alloys still need further research; improve the shape memory of nitinol through surface coating.
Based on the binding ability and corrosion resistance of the alloy to bone tissue, long-term in-depth research is still needed to optimize the binding stability and biocompatibility of the alloy to the body after implantation.
Share
0