What is the Medical Uses of Nitinol?

What are Nitinol stents used for? 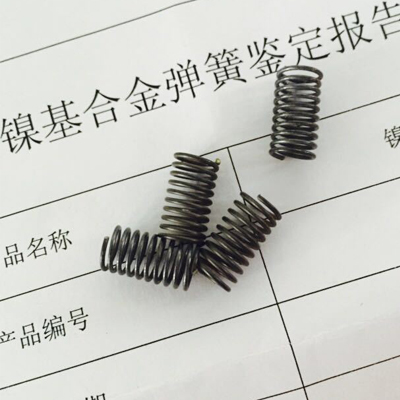 Shape memory alloy is a new type of functional material developed in recent decades.The most important feature of this material is the shape memory effect, that is, the material is deformed and then heated,when the heating exceeds a certain temperature, the material will automatically return to its shape before deformation.Since 1951, people first found a unique memory effect on Au-Cd alloy,in 1963 the United States Naval Weapons laboratory found that TiNi alloy has a shape memory effect, after more than 30 years of research and development,shape memory alloy has entered the commercialization stage,has been widely used in industrial automation, energy, aerospace, medical and health, automotive, home appliances, civil engineering, instrumentation and machinery manufacturing and other fields.

2.Overview of the development of shape memory alloys

There have been reports of the discovery of shape memory effects as early as the 1930s.In 1951, Chang and Read observed Martensite migration with temperature changes directly with optical microscopy in isoatomic ratio Au-Cd alloys.A few years later Burkart observed the same phenomenon in the TiNi alloy.However, because the early discovery of alloys with SME is very expensive and has little industrial value, the observed SME is treated only as a special phenomenon of individual materials and has not aroused enough interest and attention.It was not until 1963,when Dr. Buehler of the US Naval Ordnance Laboratory(NavalOrdanceLaboratory)discovered by chance that the near-isoatomic ratio of TiNi alloys had SME,and launched the commodity Nitinol alloy, that SMA research entered a new stage. Around the 1970s,SME was found in Cu-based alloys.Otsuka et al. found that SME in this type of alloy is closely related to thermoelastic Martensite phase transition.
In the 1970s,SME was also discovered in the study of Fe-based alloys.In 1973,Kajiwara found that the parent disordered Fe,Pt alloy has reversible motion at the C/A interface in FccyBcc Martensite phase transition, resulting in SME.Enami reported in 1975 that SME exists in stainless steel.In the same year in the study of Fe,Mn alloy also found SME.Kajiwara et al. in the systematic study of Fe,Ni,C alloy found that the alloy sheet martensite as long as the deformation does not occur plastic deformation, it will appear SME.In the 1980s, FeMnSi SMA was successfully developed, which attracted great attention to SMA.In the 1990s,with the development of science and technology, high temperature shape memory alloys, wide hysteresis shape memory alloys and alloy films have become hot topics of research.
The development of shape memory alloys is inseparable from the study of mechanism.A large number of facts show that there is an inseparable relationship between SME and martensitic phase transition, and most of the materials have the characteristics of remembering the original shape due to the occurrence of thermoelastic phase transition.The so-called thermoelastic Martensite phase transition refers to the chemical driving force only overcomes the elastic strain energy in the phase transition, often in the form of positive migration of the phase interface to achieve positive and reverse phase transition.Therefore, Wayman proposed three criteria, namely thermoelastic Martensite phase transition, mother phase order and Martensite twin sub-structure or laminar fault.In recent years, the development of iron(such as FeMnSi alloy)and other small alloys by inelastic Martensite phase transition in disordered parent phase can show SME challenge to the Wayman three-criterion.The C/E interface or Shockley incomplete dislocation a/6 in FeMnSi-based alloys can be used for right reverse migration,but the thermal hysteresis is as high as 100K,so the CyE Martensite phase transition of FeMnSi-based alloys does not fully meet the thermoelastic Martensite phase transition characteristics.With the gradual and in-depth study of the SME mechanism, the academic understanding of crystallographic reversibility of phase transition process, Martensite variant combination and self-collaboration mode formed by coordinated action has been basically unified.It has been shown that the crystallographic reversibility of phase transition process refers not only to the lattice recovery through reverse phase transition, but also to the disappearance of various defects in the phase transition process.The reversibility of phase transition in crystallography is a necessary condition for the generation of SME.The self-collaboration of martensitic variants is a common phenomenon to reduce the strain energy of phase transition.The better the variant is coordinated, the better it will be for SMEs.
As a new type of functional material integrating perception and drive, shape memory alloy is an important member of intelligent material structure and has important theoretical and applied research value.At present,the number of research papers on shape memory alloys has ranked first in the field of martensitic phase transition research,and the application of the material has been involved in fields such as electronics, machinery, energy, aerospace, medical and daily life, showing a strong momentum of development.

The use of nitinol shape memory alloy as the driving force of the tubular mirror can be achieved by remote control of various complex movements of the tubes of the human body ,with this tubular mirror, surgeons can perform microsurgical operations on blood vessels and so on.

b. Device for releasing the drug

Researchers have invented a drug-releasing device that can be placed in the human body to eliminate pain and problems caused by prolonged injection.A miniature valve on the device for the release of drugs is activated by elements made of an alloy with a memory of the shape of nitinol.The opening and closing of the miniature valve is controlled by heating or cooling the nitinol memory alloy element.

Tactile gloves made of nitinol shape memory alloy, developed by American scientists, can reflect the magnitude of the force of touch and contact ,avoiding the phenomenon when doctors often make mistakes when performing microsurgical operations using micromachines or robots, because they do not feel a little on their hands during the control process.
Its main principle is:the output signal of the sensor is converted into a certain size of the heating current, so that the temperature of the nitinol shape memory alloy element regulates the amount of force acting on the doctor’s hand.

Miniature surgical forceps made of nitinol shape memory alloy were invented by American researchers for the surgical treatment of brain tumors in the event of a stroke.

b. Micro-pump for artificial organs

The need for continuous administration of anticoagulants, neutralizers and other portable artificial kidney systems for medicines requires that the flow rate of the drug injection pump is extremely small and reliable, made of a TiNi shape memory alloy.This pump is not only simple and compact, easy to operate, but also very reliable.

The main areas of application of nitinol in dentistry are orthodontic wire, dental implants and locking rings.For example, the study of nail suturing for the treatment of cracks on teeth.

Currently, the use of the SMA mesh structure to support the biliary tract with a large spiral angle can provide unhindered access to the biliary tract in the treatment of biliary stenosis or surgical resection of obstruction, prolong the survival time of patients and improve the quality of life.

Vascular surgery is a common disease in medical practice for thin aneurysms, so long-term development can lead to rupture of blood vessels, causing severe bleeding.The role of nitinol shape memory alloy in vascular surgery mainly consists in:
Therefore, intravascular SMA stents made of nitinol shape memory alloys can be used instead of hemangiomas with aneurysm parts.

Shape memory alloys are mainly used in orthopedics for the manufacture of orthopedic rods for the spine,curium nail concentrators, internal fixators and artificial joints.

The use of SMA at low temperatures with a small modulus of elasticity, good plasticity and other characteristics of the SMA stent in the treatment of various esophageal and tracheal stenoses in the process, is easy to install, reliable, and in case of surgical failure is also very easy to remove.Using the SMA shape restoration force at high temperatures, which can also be used as an artificial heart power source, the principle is simple, the memory of the reduction of the SMA wire attached to the outer wall of the artificial ventricle, the SMA wire that is energized after heating, it will lead to a contraction of the ventricle and produce a pumping effect.

The SMA stent is a kind of medical instrument used to treat urethral obstruction caused by prostatic hyperplasia, which easily damages other tissues and is incomparable with other materials.
Share
0